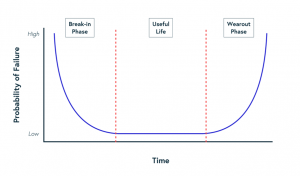 As an industrial company’s operations rely on your assets running smoothly, these need to be maintained before they ever get to an increased probability of failure and interrupt operations. To address this, many companies implement a preventative maintenance schedule whereby, from past experience or manufacturer guidelines, they assume that the risk of failure increases after a fixed amount of runtime hours. However, this maintenance strategy does not take into account the actual condition of the asset. This can often lead to prematurely and over-maintaining your assets resulting in excessive maintenance cost and downtime, negatively impacting your productivity.

Interestingly, the often overlooked implication is that when an asset is maintained, the brand-new components inserted into the asset introduce a new risk of failure. Effectively, the bathtub curve clock returns to zero for the entire asset and, therefore, the risk of asset failure and interruption to your operations increases. So not only is over-maintaining an asset expensive, but it may also increase its probability of failure.

With SmartEdge, companies can now monitor their assets remotely to understand in real-time their assets’ probability of failure. This means they no longer have to rely on inefficient, and potentially risky, preventative maintenance schedules. By transitioning to condition-based monitoring and maintenance strategies, they can maintain only those assets entering the wearout phase where probability of failure gradually increases. The result: lower costs, higher asset reliability and improved productivity.